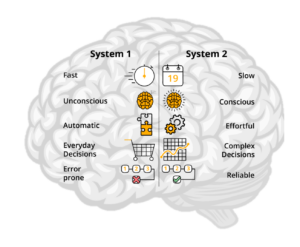 We’re all biased. It’s the way evolution has shaped us, and it really isn’t (always) such a bad thing. These cognitive biases developed for good reasons, namely helping us to survive and thrive as a species. But the issue is that these biases are more suitable for the African savannah than for the urban jungle. These biases (also called heuristics or mental shortcuts) are part of what Daniel Kahneman describes in his book “Thinking, fast and slow” as System 1, or the “fast thinking” part of our cognition. System 2 is the slower, more deliberate form of cognition that we use to make complex decisions. There are loads of biases and they’re fascinating to learn about, especially because you realise you encounter them everywhere, all the time! Because of the sheer number of them, there’s been an effort to categorise them into the problems that they try to solve, which might be seen as the following:

Our senses are constantly bombarded with information. However, we really need to know what information is critical. Take, for instance, that gold-coloured flicking tail just sticking out of the grass on the savannah. Ignoring that might be limiting. But we would come to a standstill if we had to try to process all the information we receive. So we don’t. We use all sorts of techniques to filter this information to find that which is relevant or important.

Even though we have all this info flying at us, it’s often not connected and doesn’t make that much sense. So we impose our own meaning on it. We string together stories that link the information and then we act on that. Sometimes this can be very powerful, sometimes not so much. Often we simply climb up the ladder or inference.

When we see that flicking tail in the grass, it’s important to act fast. We’ve developed all sorts of shortcuts to facilitate with fast decision-making to ensure our survival. But these same shortcuts can have very detrimental effects when we really need to take the time to think before acting.

4 – What should we remember?

With all this information, we have to decide what’s important for us to remember. With your survival on the line, it’s best to remember the colour and shape of the root that might poison you. We tend to generalise to make it easier to remember things, but by generalising you can often miss important details.

The first step to any problem is to gain knowledge, so to understand what we’re dealing with, here are a few of the cognitive biases that I find play out often in the coaching space and are important to be aware of.

Probably the most important bias to know about is this one. The bias blind-spot is the ability to easily spot the proverbial speck of sawdust in someone else’s eye, but fail to notice the log in your own. This is also something that coaches are as prone to as others. Not me though – only other coaches. But seriously, if you can’t admit you have biases, you may as well flick to another website now. There’s no hope for you.

The Curse of Knowledge 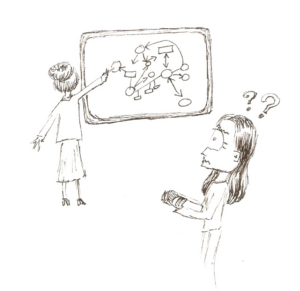 Here’s another one that coaches struggle with. The curse of knowledge is the inability to take yourself back to the place and time before you had the knowledge you have. You can no longer see the world like you used to and you can’t understand how others can’t see the world as you do now. This can be fatal for a coach. How are you supposed to help people change if you can’t understand where (and indeed when) they are?

The other way this manifests is in our communication of ideas and concepts. We use jargon, lingo and industry-specific acronyms, which can have the unintended consequence of pushing your clients away from you, not bring them closer. 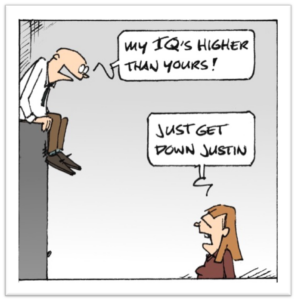 It may have a fancy name, but you’ll know this one. Those with the least knowledge of some topic are the ones spewing forth wisdom on that topic. They’re the same people that read a blog post about agile and the next day walk around the office telling everyone they should be having 15 minute ‘scrums’ if they want to be agile.

What’s quite ironic is that there is an opposite effect called Imposter Syndrome, where those that are the most qualified feel like they don’t know enough and that any minute they’ll be found out. I guess somewhere in the middle we’ll find the balance.

When you believe something to be true you can bet you’re going to find lots of evidence to prove it and avoid any evidence to the contrary. Google is great fuel for this particular bias. We find those articles that complement our beliefs but shun any articles that don’t.

Your clients want to go agile. But they say: “It won’t work here. We’re different. Our circumstances are special. We’re not [fill in the agile company name here]. They don’t have legacy systems like ours.” Welcome to the Semmelweis Reflex. People reject concepts, technology and any new ideas that don’t fit into their current paradigm. Don’t get me started on the DevOps pushback!

Probably the most common bias of them all. We simply have to put people in boxes – we can’t help it. How often have you heard the developers talking about ‘business’ and how they just don’t get it? They push and push, they’re always trying to get more work into the Sprint, etc. And what do the business people say about developers?

Law of the Instrument

You know that story about having a hammer and seeing every problem as a nail? We do that too. Take Scrum. We hammer that in everywhere. Doesn’t matter if it’s really suitable or not, godammit it’s agile!

Observer: I was driving to work the other day and this idiot cut in front of me! What was he thinking! He shouldn’t be allowed on the road!

Actor: I was driving to work the other day and I accidentally cut in front of someone. It wasn’t my fault – there was a glare from the car next to me and the damn coffee I was drinking was too hot (I’ve told that barista a hundred times not to make it so hot!) and it burnt my tongue, making me spill it over my new shirt!

Yeah, when it’s someone else, it’s their fault. When it’s you, it’s still someone else’s fault. Go figure.

These biases are just the tip of the iceberg. There are many other ways your brain takes shortcuts. So what can we do about it? (see how I used ‘we’ there and not ‘you’?) Well, it’s a bit like the 12 steps in the AA – you’ve gotta admit to having these biases first before you can move forward. However, just like alcoholism, you’ll never get rid of cognitive biases. You can become better at spotting them and stopping yourself from acting out, but your system is wired to play out in this way.

Here are some tips that might be of use.

This isn’t an easy journey. We’re human and we’re born with an operating system full of strange programming. With a bit of discipline and lots of self-observation we can learn to harness the best of ourselves.