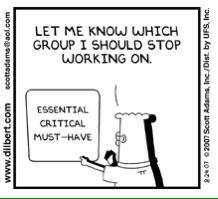 It’s important to prioritise. Yes, you’ve heard that before and you’ve probably heard it often. It seems like such an obvious point, and it is, but it’s often really hard advice to follow. Every minute of the day there are hundreds of things vying for our attention, all calling to be handled and dealt with NOW, all wanting immediate gratification. As I type this there are numerous notifications popping through from the top of the screen enticing me to lose focus and instead chase that white rabbit down the distraction hole of despair. Every day at work we have people breaking our flow with “do you have a minute for me?” when they know it’s clearly not going to be just one minute. While driving to work we remember that thing we need to do and pull out the phone to type in a reminder, only to be distracted by a message from your best friend asking about the dinner tonight and to please bring the wine. So you switch to your task app and remind yourself to bring the wine, then put the phone down, barely missing the car in from of you. You realise a minute later that you didn’t put the reminder in your phone for the intial thing you remembered you had to do, but you’ll be damned if you can now remember what it was!

This lack of focus is a product of the frantic fast-paced world we find ourselves in. Sometimes we think that we just have to keep going, just take on more so that we can get more finished. “Maybe if I juggle all these things at the same time it’ll be ok.” But it isn’t. It very rarely is, and certainly not consistently.
So what can you do? Prioritise. Learn how to deal with the next most important thing and get that done. Only that. Until it’s finished. Then look through the list of things to do next, find the next most important one to do and do that. Only that. Until it’s finished. Repeat ad nauseam.

I see the opposite of this in my work all the time. There are always so many important IT projects that must absolutely get done now urgently before anything else is done, super-critically and highest priority. But trying to do all these at the same time ends in ridiculous situations where developers are allocated at 20% across 5 projects and each project manager wants their 20% of allocated time to be more than the 20% allocated for the other projects. Heaven forbid if a project gets behind, because then the developer (who is clearly the reason for the delay) must put in her full 100% and whatever additional time is needed to catch up!

This madness must end! We need to get real about what we can do, which is actually only one thing at a time. This business of humans being able to multitask is unfounded, and even if you think you can handle it, it doesn’t lead to a flow state, which is what we should all be trying to reach anyway. We have a choice to break the cycle. If you’re a manager and think that running your teams at full capacity is going to get you massive productivity and more bang for your buck, think again. If you’re a developer and you think you can quite comfortably manage multiple projects or tasks and still produce quality code, perhaps you should build in more QA checks, cos you’re gonna need ‘em.

I’m not saying it’s easy to prioritise when you’ve got a barrage of stuff flying your way at top speed. It’s never easy to ask the tough questions, like “what is the most important work we should be doing next?”. But that’s why they’re the important ones. Sometimes just asking the questions is enough – the answer may just pop straight to the front of the queue. Just make sure the rest are following in single-file.